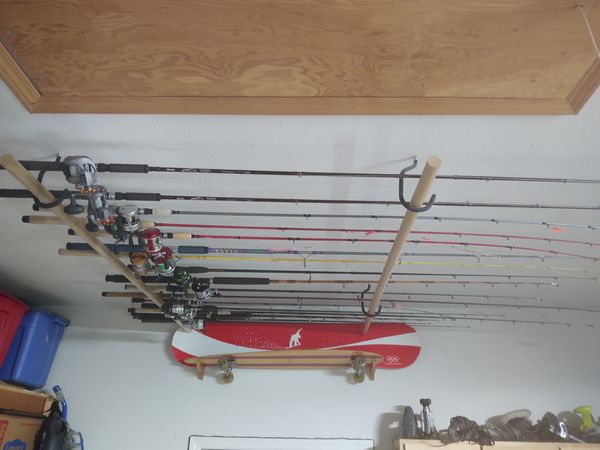 DozerDave Loc: Port Orchard Wa.
Egghead wrote:
I got home here's a picture of the rod rack. If interested, I have a better way to make it.lol. learn as you go...

I made something similar to yours for my BIL but his thought was that hanging them from the rod tip that it might impact the integrity of the tip because of it holding the weight of the rod and reel. I’m assuming you haven’t had an issue with this being that this is what your using.....🐟on

As far as I know, there is no overlap in their range although it would seem to be possible at the edges of the ranges.

| Reply
Jan 13, 2021 18:28:00   #
Lowescatfish18 Loc: Wesley Chaple florida
Oh boy there is really no right or wrong rod holders the best one I found was to make it my self live in fl. You need all those bass rods and rods for spec fishing then you need rods for surf fishing ocean then there is tampa bay fishing spinners rods let's go to keywest now break out those fly rods.ok ya I got over 40 rods that hang over my boat that never was the real issue it what do you do with all those tackle box's and piano box's build more shelfs or put some in old dressers so I know give me 1hr and I can change my boat over to fish so how's that answer your question.

ripogenu Loc: norfolk, MA
FS Digest wrote:
I currently have a rod rack that holds 16 rods in a oval shape, up until today its been just fine. Today I got reels for all the baitcasters I have been picking up, and now all the reels hit each other and forces me to space the rods out more... but that wont work as I have too many rods.

So does anyone have a recommendation for a rack that can fit around 16-20 rods (or 2 racks that hold 10 each) that have enough spacing to allow me to keep the reels on the rods? This is mostly just a issue with my baitcasters as they all have a similar handle length, the spinning rods fit just fine with a little turning of the rod. 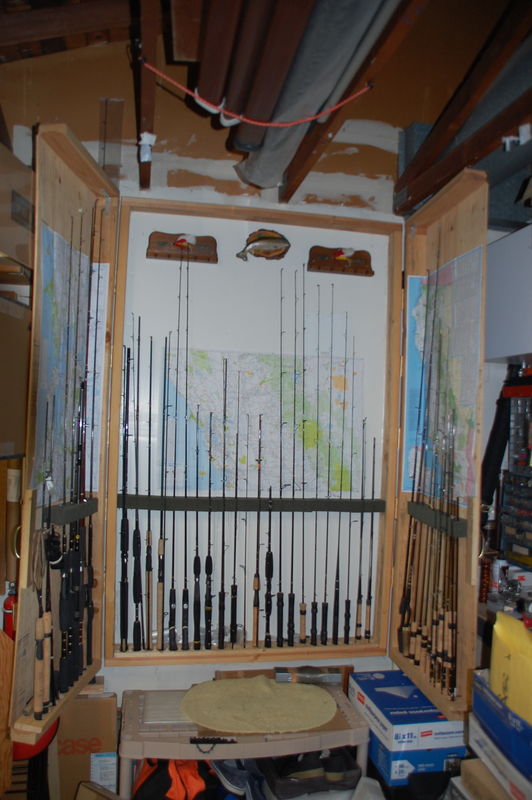