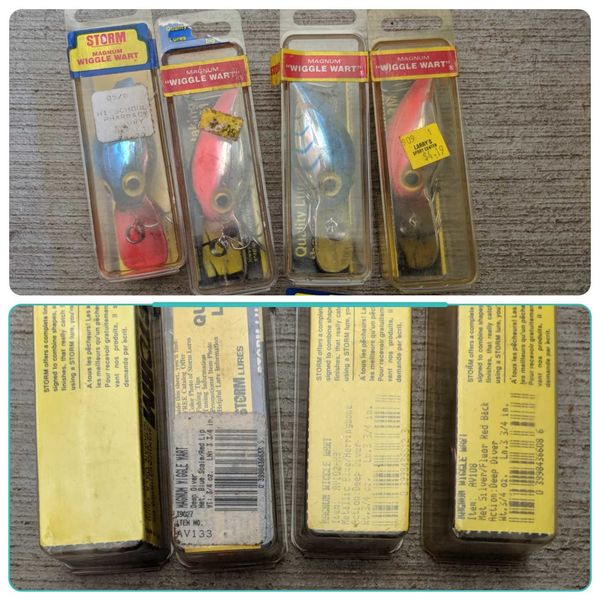 | Reply
Aug 12, 2019 20:37:13   #
FS Digest
These are crankbaits, can be used to catch a lot of different fish ranging from bass to crappie depending on the size of the lure. You fish them by casting (normally along the edge of a pond or lake) and then reeling in with consistent speed (not too fast or too slow) and the bait will wiggle around in the water, attracting fish.

| Reply
Aug 12, 2019 20:37:42   #
FS Digest
Dont open these! These are original wiggle warts. They are prized by many anglers because Storm, the company that made them, was purchased by Rapala. When that happened the molds for these crankbaits were "fixed" which changed their action so they don't hunt from side to side as well. You can find sealed new in box pre-Rapala wiggle warts listed on eBay for upwards of $100 per bait.

| Reply
Aug 13, 2019 00:05:34   #
disaksen
They are great baits for catching returning Salmon and Steelhead in river systems.
Best way to find their value is to Google the Internet for them. If you can find the web page of someone who collects Storm baits you can determine their true value. Especially if they are selling some of their duplicates, or are trying to fill their collection with a color or size they are missing, .. and you have it

Put 'em on ebay. Ask an astronomical price. Wait for a bite. You WILL get some, believe it or not!

best laugh of the day, though I would delete the 'bass' and add 'and so are golfers'.