Catfish hunter Loc: Riggins idaho
CamT wrote:
Definitely a great day of fishing and with your sons it don't get any better than that congrats Catfish

Thanks. Since we moved 7 hours closer to the kids we get to see them way more often. It’s great spending more time with them for sure.

Catfish hunter Loc: Riggins idaho
saw1 wrote:
Alright Randy, those are beautiful fish. Congrats on the catch AND fishin with your sons.

Thanks Steve. We caught some nice Kamaloop too. Kept 3 over 3 pounds and threw several back any smaller than 3 pounds. Caught several small mouth as well and kept a couple for Teresa. She likes bass. I’m headed back up there Sunday for a few hours and see what I catch. Hopefully have more pictures🤞

Catfish hunter Loc: Riggins idaho
Fredfish wrote:
Awesome Perch Catfish, and great you get to fish with your sons

I haven't seen Yellow Perch that big since I snuck into a Reservoir to fish, when I was a kid.

The new world record came outa there this year. Big female with about a pound of eggs in her. The owner of the local tackle shop pays $1000.00 to anyone who breaks the record so there’s lots of people after that, extra, ounce. Lol

Thanks. It’s a beautiful lake in the mountains for sure and to get my boys out in the boat makes it even more awesome.

Reply
Jun 19, 2021 12:18:39   #
Mustang 19 Loc: SW Idaho
Great looking catch. We live in Star and are looking forward to a trip to Cascade to escape the heat. Fished Lucky Peak Tuesday and did better than most. 5 Kokanee and a rainbow but we worked real hard. (Pictures to follow.) Maybe you can give me some tips before we head out.

Going to be focused on Sturgeon in the Snake until we can’t take the heat anymore. 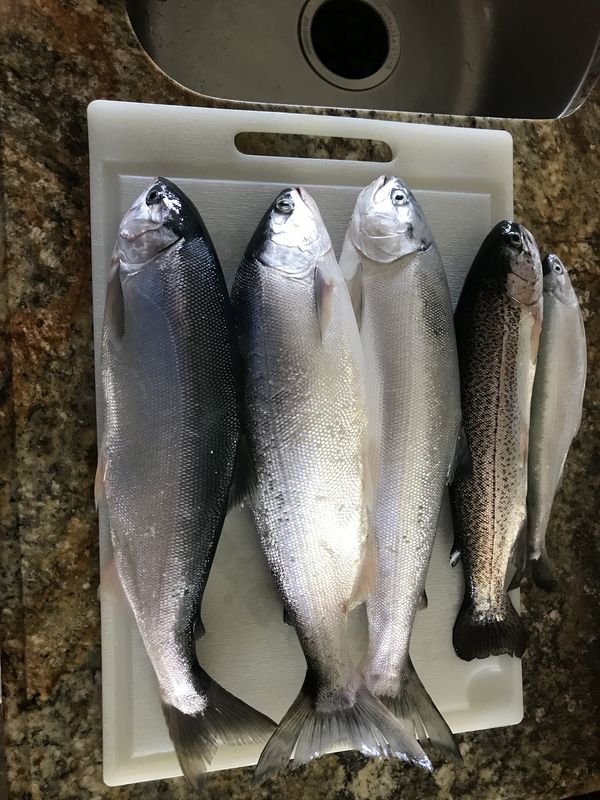 Those are some nice fat Kokanee. Good job. You bet on the tips. Just PM me and I’ll tell you everything I know about it. The heat is here. Mid 90s today in Riggins so I’m guessing hotter over on the Snake. I used to fish a bunch for sturgeon on the Columbia but I haven’t tried the Snake. It’s all catch and release over there right? I got all the gear for sturgeon but not quite the Snake River boat. My is a Lund Fisherman, 18 footer, and a little light for those boulders over there. I’ve fished for bass from the bank in Hells Canyon and I fish for a living from May through September most years on the Snake over below Lower Granite dam. Pretty mild river down that far. There’s quite a few sturgeon there too but I don’t fish for em. I see lots of guys doing it though and they catch quite a few but the big ones are around 6 feet over there.

Those kokanee sure are pretty. And tasty too. 😋 nice picture.

If you take highway 55 out of Boise north it’s 70 miles. A little over an hour. If you come from the North it’s 30 miles south of McCall, about 30 minutes or so. Takes me an hour to get there from Pollock, 61 miles.

Reply
Page <prev 2 of 2
If you want to reply, then register here. Registration is free and your account is created instantly, so you can post right away.
Main
Home | Latest Digest | Back to Top | All Sections
Contact us | Privacy policy | Terms of use | DMCA
FishingStage.com - Forum
Copyright 2018-2021 IDF International Technologies, Inc.