Robert J Samples Loc: Houston TX
To the contrary of most communities, when we would come back home, say we had been to town if we arrived in peace and quiet, we would immediately know there was some trouble!

In our community, there were buildings we called Powers, or the large sheet metal buildings that contained large power engines which provided the necessary power to pump 15 to 20 oil wells by means of rod lines that would actuate the pump jacks in maybe 360 degrees from that power unit.

It really did not matter whether it was the unit on Hyman Lease 1 or 2, or another power unit, it was quickly noticed. The pumper who was responsible for the unit would quickly go and get that engine restarted.

I will now try to describe the layout of a power building. I suppose these units were about 75 to 100 feet wide by 300 or more feet long. Toward the front was a single cylinder engine that was connected to transmission equipment that was massive. This cylinder along way about as long as an automobile and a diameter of maybe 3 feet and powered by natural gas.

This engine was connected to a transmission unit that was also massive. All of this had a vertical flywheel that was at least 16 to 18 feet tall. When running this single cylinder provide power to this transmission equipment which then turned a large wheel when set in gear would move a continuous belt 12 to 14 inches wide. This wide belt ran back 50 to 60 feet and around an extremely large wheel that was flat, and which was 40 to 50 feet in diameter. This large flat wheel actuated several concentric discs below it. These discs would rotate and pull push rods that were attached to rod lines that led out to distant pump jacks that pumped the individual wells.

If for some reason a power unit went down and quit running, the pumper’s job would be to get it running again. Some of the wells that were connected to this power unit would be required to be pumping at different times for set periods. This was part of the requirement of the Texas Rail Road Commission’s mandate of allowable production periods. I am not able to describe how deafening this lack of these power units running was like to us where were citizens of such a community.

The method of restarting this was complicated. The fuel supply had to be cut off momentarily, the belt drive has also disconnected or taken out of gear, after readjusting the engine and getting the fuel flow, the pumper would have to climb up on the large vertical wheel and with his entire weight, get this wheel to turn enough for the large cylinder to fire. If it caught and began running, he would jump off the wheel and put the conveyer belt into motion that started the wells pumping again. My father injured his back doing this and had to spend a summer in a Dallas hospital having back surgery, to recover. Just Sayin…RJS 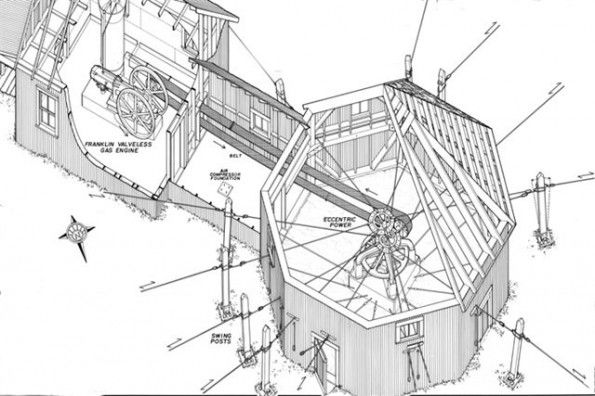 Robert J Samples Loc: Houston TX
FourchonLa: Well, that is awfully close. But the big portion of our power units the wheel was flat and was much larger. Other than that, you've prfovided a very accurate picture. Just Sayin....RJS

FourchonLa. Loc: Fourchon Louisiana, South Louisiana
Robert J Samples wrote:
FourchonLa: Well, that is awfully close. But the big portion of our power units the wheel was flat and was much larger. Other than that, you've prfovided a very accurate picture. Just Sayin....RJS

It’s another version of an oilfield Jack plant. Your single cylinder engine was the central power unit as you described. Pretty ingenious folks.

Robert J Samples Loc: Houston TX
FourchanLa: I think your plan might make more sense. Our power units had a much longer belt since it had to taverse the entire main wheel that was probably adding 150 to 200 more feet, Now that wold allow more power if you were running more wells at once. The way your drawing is arranged, the drive belt on that small wheel might fail to handle as many wells at once. Just Sayin...RJS

| Reply
If you want to reply, then register here. Registration is free and your account is created instantly, so you can post right away.
General Chit-Chat (non-fishing talk)
Home | Latest Digest | Back to Top | All Sections
Contact us | Privacy policy | Terms of use | DMCA
FishingStage.com - Forum
Copyright 2018-2021 IDF International Technologies, Inc.